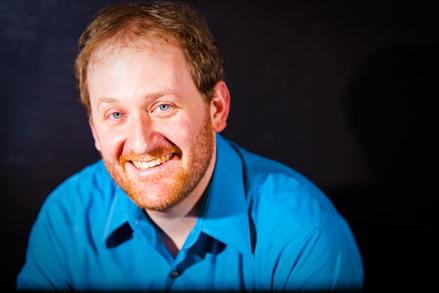 Photo by Wide Eyed Studios
Shaun grew up in Texas with his parents, younger sister, and grandmother. He had a relatively normal life until he was tossed into a speech class in the 8th grade. That's when, by performing Bill Cosby's Noah, he was irreversibly consumed by performing.

In 1996, after enjoying some school plays, he landed his first big role as Dodger in the local community theater's production of Oliver! He continued acting throughout the rest of his high school career performing in numerous productions including A Chorus Line, It Runs in the Family, and The Wizard of Oz. He also remained active in the community theater performing in shows such as Grease, Footloose, My Fair Lady, A Funny Thing Happened on the Way to the Forum, South Pacific, and Fiddler on the Roof.

After graduation, he enrolled in the local college; Angelo State University, at the time part of the University of Texas system. There he studied under numerous vocal and acting coaches including Dr. Eldon Black and Dr. Tamara Watson. He continued performing in numerous musicals including Company, A Little Night Music, Once Upon a Mattress, and West Side Story.

His first big break was being cast in Texas Family Musical's productions of Annie Get Your Gun and All Shook Up. That led him to two seasons in northern Wisconsin doing such shows as The Complete Works of William Shakespeare; Abridged, Funny Money, Same Time Next Year, and Tuesdays with Morrie.

After being away from New York for so long, he decided the time was ripe for a change and decided to move in with some friends in Philadelphia. He got a job working at Hedgerow Theatre in Media and has since been working rather steadily in the area ever since.
Powered by